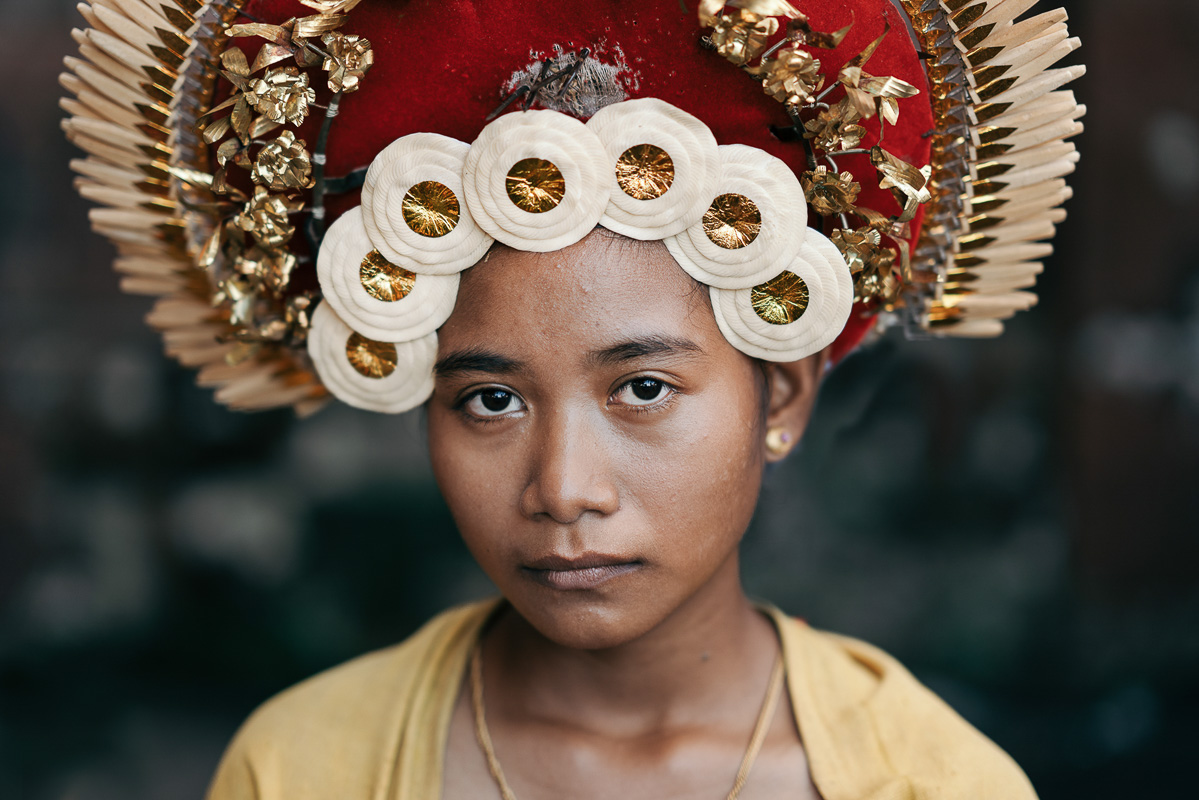 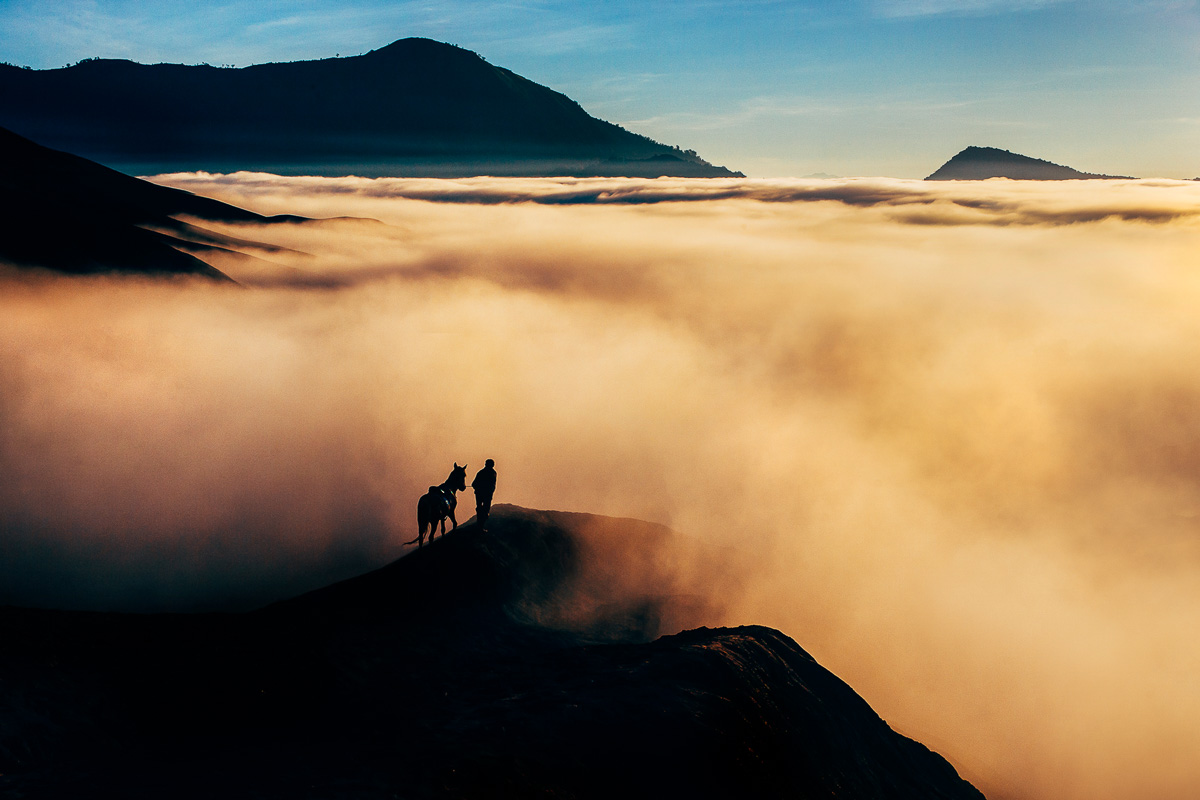 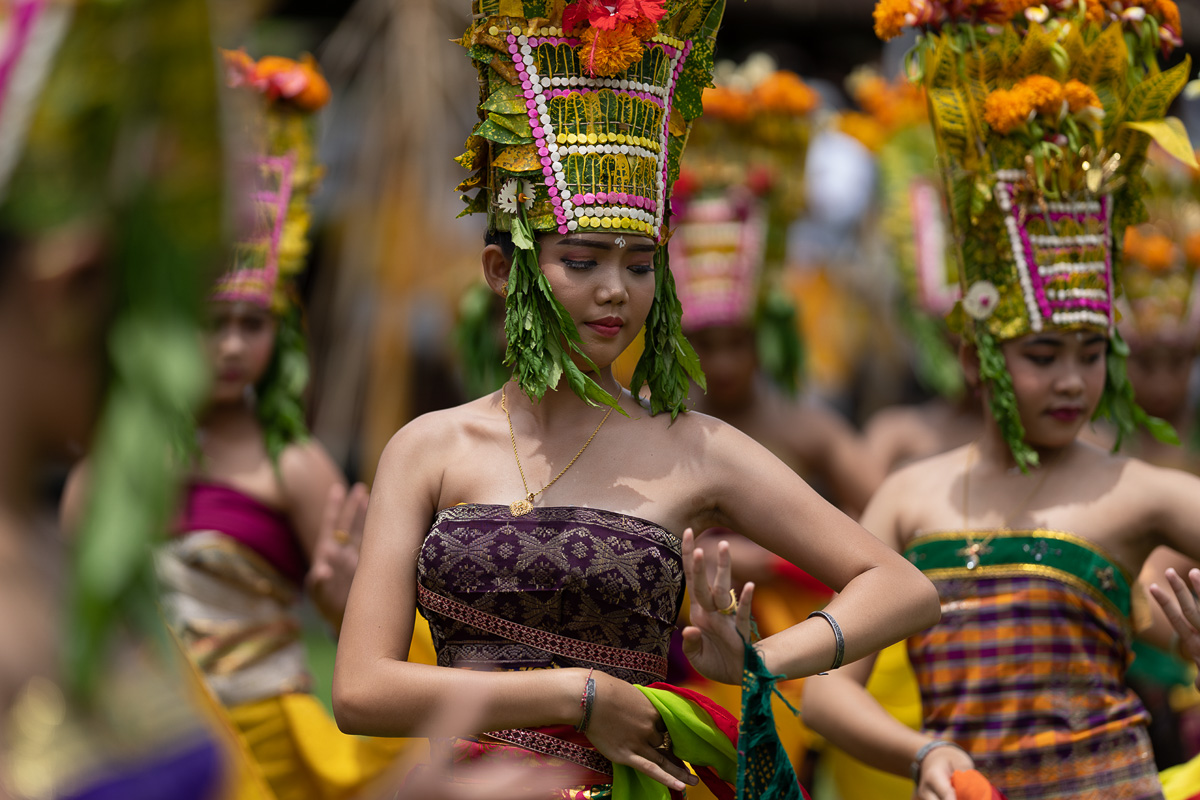 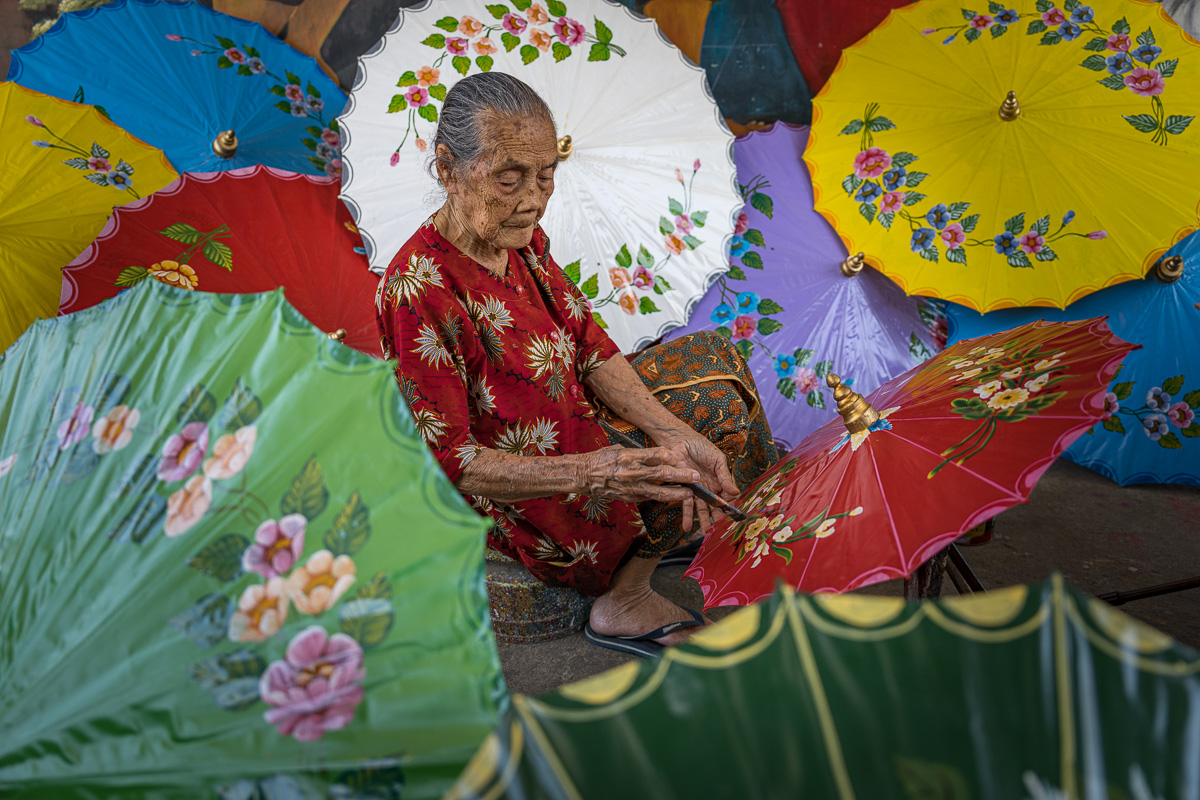 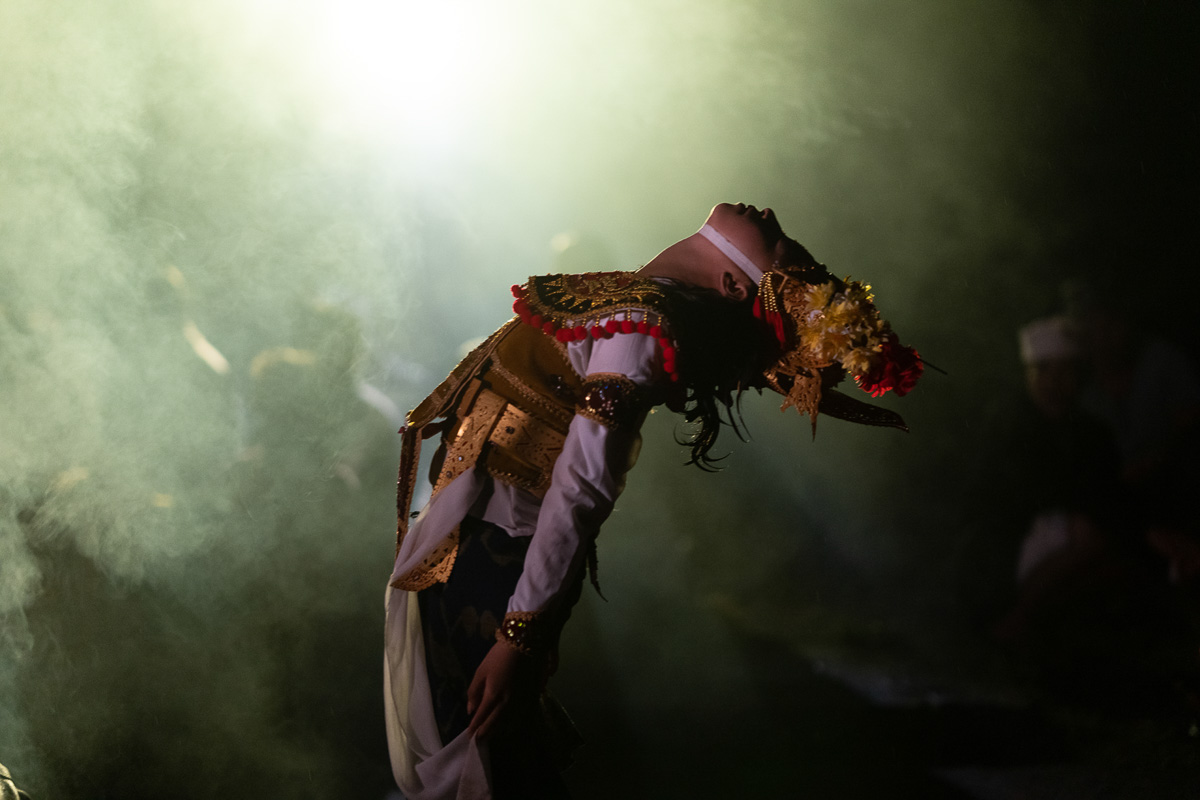 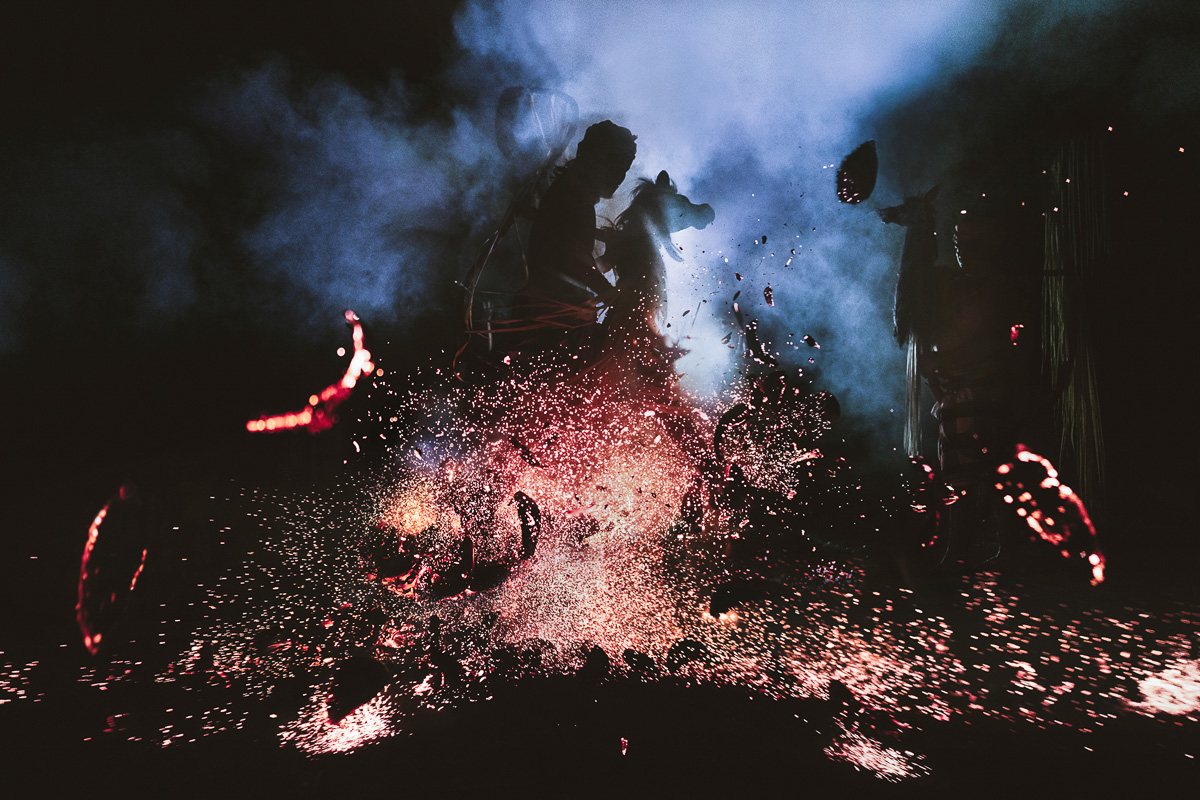 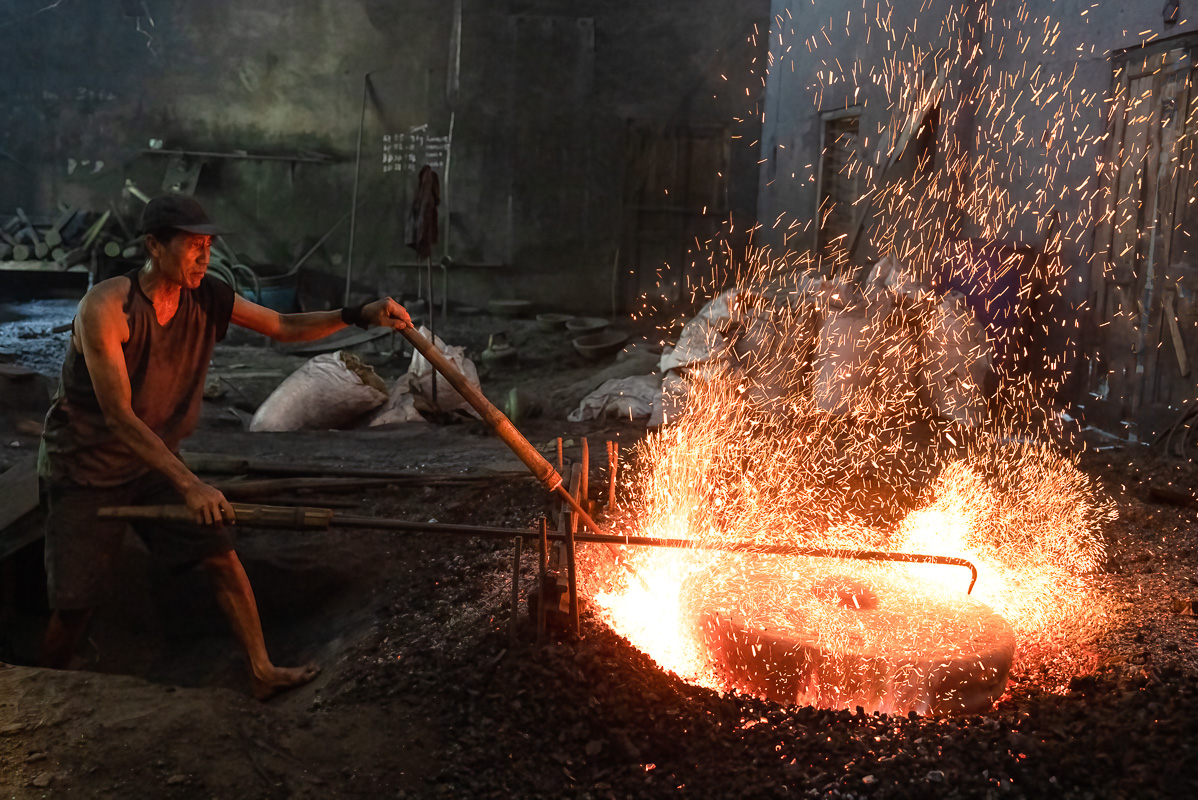 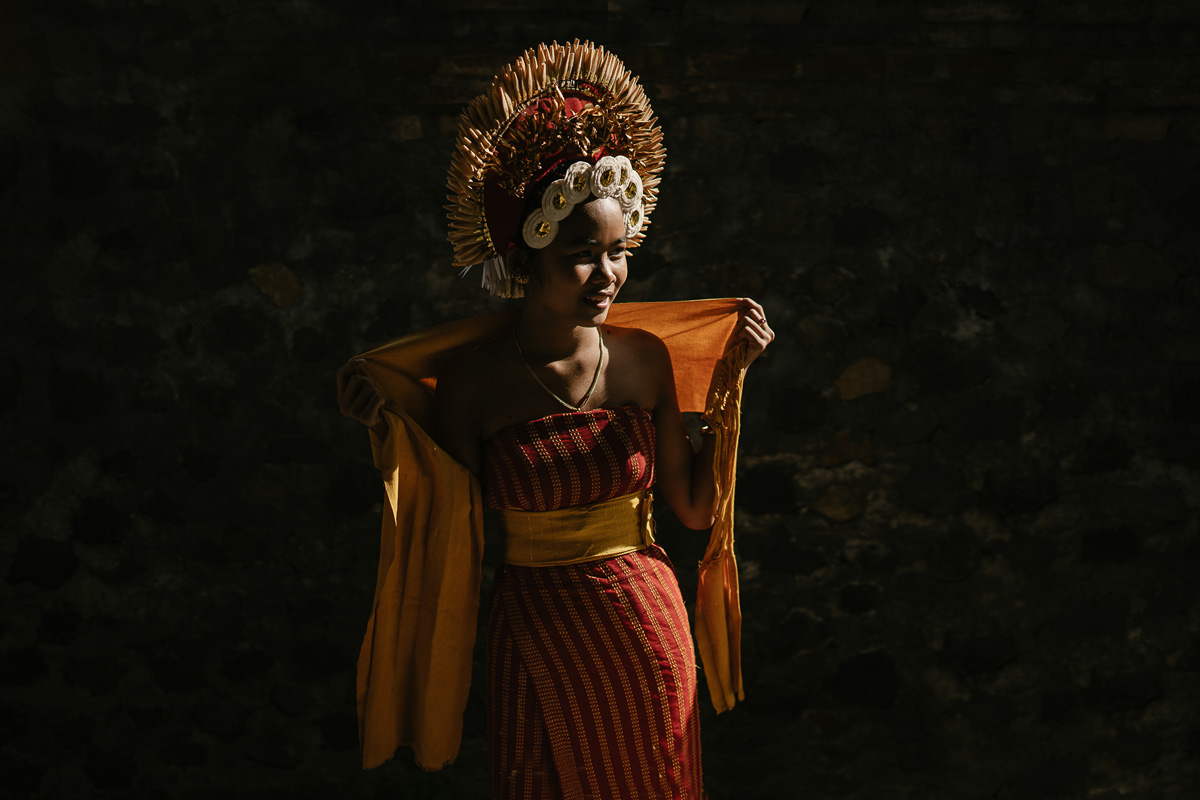 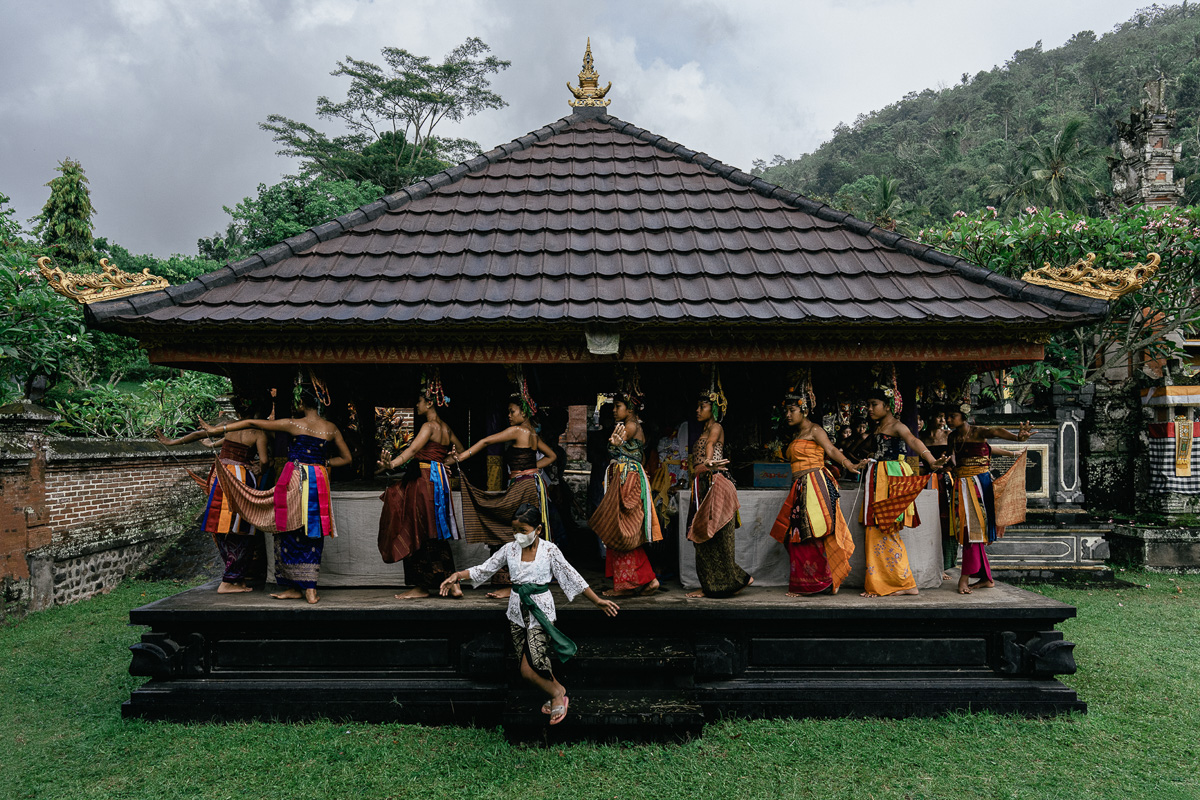 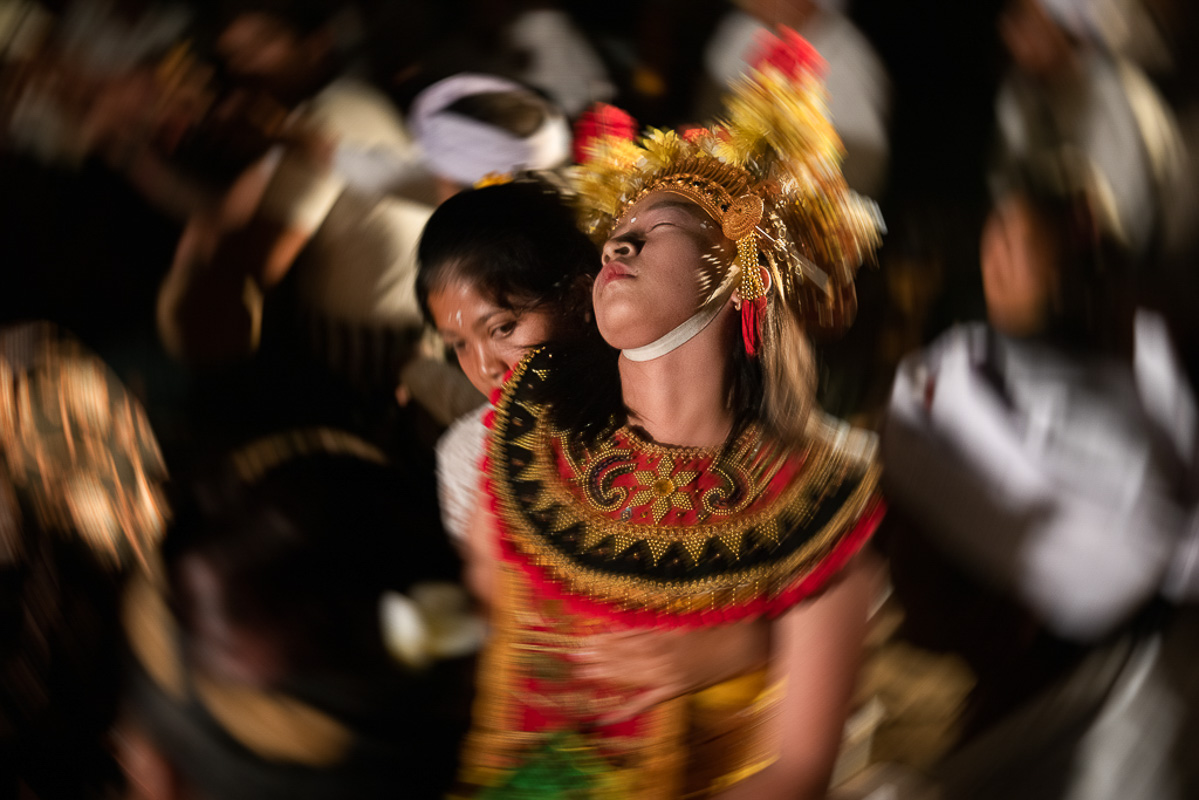 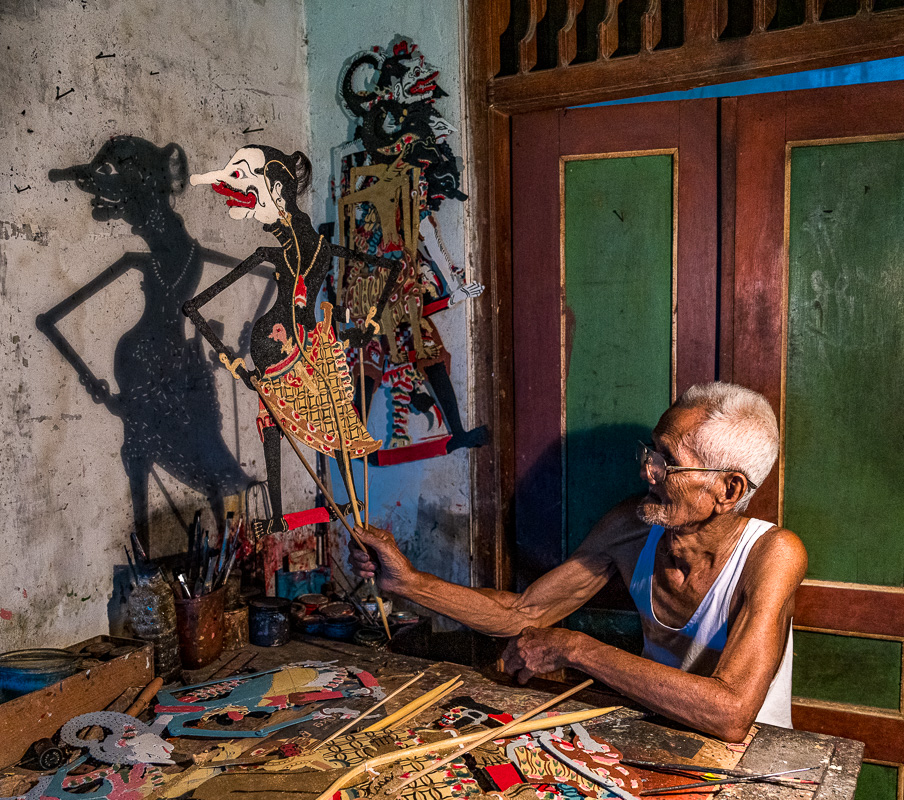 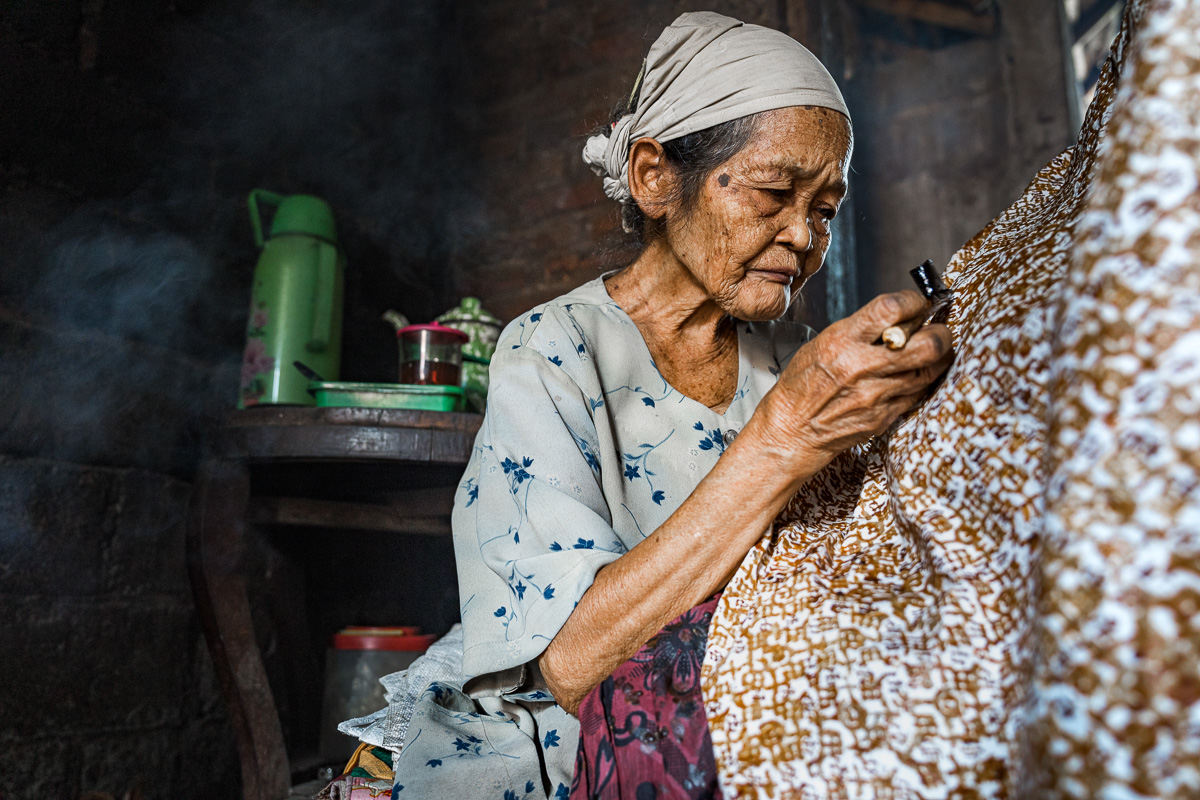 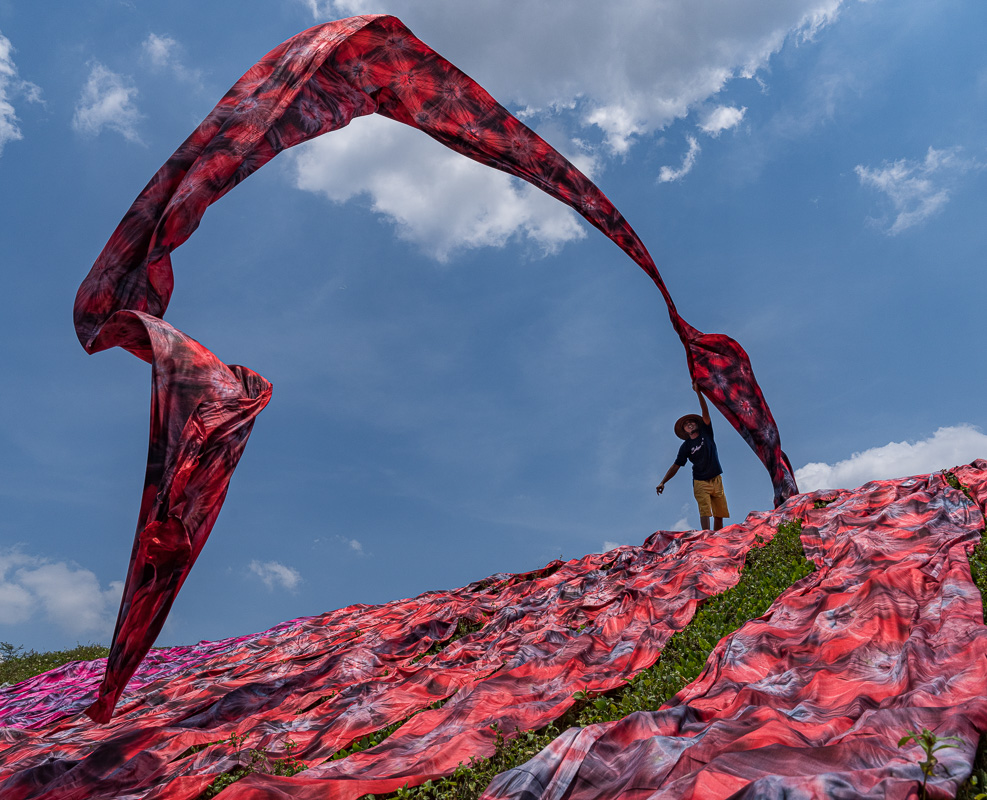 Bali and Central Java offer a wealth of opportunities for photographers to capture the stunning beauty and rich culture of Indonesia. From Balinese rituals to ancient temples and volcanoes of Central Java, this photo tour will take you on a journey through some of the most breathtaking landscapes and cultural treasures in the region.

On this 14-day tour, you’ll have the guidance and support of Patrick who explored Indonesia many times, and a local acclaimed photographer and his team who will help you connect with the people, capture the best images and provide tips and techniques for improving your photography and storytelling skills. Whether you’re a seasoned pro or a beginner, this photo tour is the perfect way to discover the beauty and culture of Bali and Central Java through dialog with locals and the lens of your camera, and experience its richness firsthand.

You will have the chance to meet and interact with the local people,  craftsmen, horsemen, dancers, and storytellers, learning about their traditions and way of life.  Some of the people you’ll meet are the last few artists performing their craft transmitted through generations. Thanks to our research and local connections, we arranged to witness many private and intimate cultural performances and local art, such as batik and shadow puppet making. We managed to connect with remote villages and get permission to respectfully attend their private ceremonies, a privilege granted to few. In the Bromo caldera, you’ll have the chance to direct and photograph hordes of horsemen, and in the remote Balinese villages, you’ll witness the preparation of dancers in their homes before attending their rituals.

Day 1 (Aug 8):
Arrival in Denpasar, Bali’s international airport. Pickup and transport to our resort for orientation and dinner. You will meet our local cultural expert and cultural guide and Sony/Leica ambassador and renowned expert Sandy Wijaya, who will accompany us during this journey. Spend the night in Ubud.

Day 2 (Aug 9):
We drive north to a secluded village to meet and take a portrait of a legendary Legong dancer in this part of Bali. After lunch, continuation of our portrait shoot, focusing on ancient Legong dance meaning, and movements. The dance is considered one of the island’s most revered classical pieces, known for its physically demanding postures and fast-paced movements which require a significant level of flexibility among its generally young female performers. Choreographed to a set pattern with the finest detail, the dance has been well-preserved through generations. We will have an early dinner and then proceed to a remote village to witness a private Puppet Sacred Dance, a trance ceremony. Unique to this village and only witnessed by National Geographic in 1931 and 1959, undiscovered since. Dance is often practiced to save villagers from diseases. Late finish and return to the hotel. Spend the night in Ubud.

Day 3 (Aug 10):
After breakfast, we will visit Wayan Dirga, a prominent sacred Balinese mask artisan in Ubud, a lontar writer, and philosopher. Environmental portrait shooting and his daily life around his house/workshop. Later in the afternoon, we will assist a Fire Horse dance: Sanghyang or Hyang is an important type of spirit entity in ancient mythology When this spirit or unseen force is invited to enter the dancer’s body, the Balinese call it Sanghyang Dance. Then, when the spirit of “jaran” or horse enters the dancer’s body and performs a horse-like behavior, people call it Sanghyang Jaran Dance (Tari Sanghyang Jaran). Note that we will bring lighting equipment and provide all guidance to such photography, as this event takes place after sunset. Spend the night in Ubud.

Day 4 (Aug 11):
We transit to another area of Bali and check into a heavenly seaside resort, settle and enjoy lunch overlooking the ocean. In the afternoon, we visit a traditional village, weaving lady set, Daha. Tenganan Village is the oldest Balinese Traditional Village located in Karangasem Regency, east part of Bali. This village is much referred to by the cultural literature science of Tenganan Pegringsingan, which is very famous on the island. It has a very unique local community life pattern which is one example of Bali Aga Village culture (Hindu Prehistoric) and different from other countryside in the center of Bali. Through our connections, we have exclusive access to meet artisans, artists, and performers. You will learn portraiture, especially using natural light, to create beautiful rim-light, bouncing light. Spend the night in Kuta.

Day 5 (Aug 12):
We return to our traditional village for more portraiture and cultural discoveries. After lunch, transit to Rejang villages, and witness Rejang dances. Rejang itself means “offering”, which is basically offering themselves to the gods. There were even some cases that the dancers lose themselves in the ceremony. Where they have a transcendental experience and reach a higher state of consciousness. Local people believe that Rejang has an important role in a ceremony. The dancers are said to be the heavenly maidens. They come to earth to welcome the gods to bestow protection and prosperity on earth. This dance is usually taught from generation to generation so that the tradition doesn’t stop. Spend the night in Kuta.

Day 6 (Aug 13):
We have exclusive access to a local family and witness the Rejang preparation of a dancer. Portraiture and environmental portrait shooting in the villagers’ house. Rejang dance was created in the 8th-14th century AD This dance is usually performed in temples, or in sanggah (sanctuary) during the ceremony, as a sense of dedication to the ancestors. This dance is performed by women during the ceremony of worship with the position of marching, circling, and also holding hands. After lunch, we will witness Rejang dances in other locations. It is said that the Rejang dancers in Karangasem Village are symbolic to the nymph in the myth of Dewata Nawasanga, a story of a great fight between Gods and giants over holy water of immortality. The stunningly beautiful nymphs definitely took the side of the Gods, giving great support in charming the giants so the Gods finally win the holy water. Spend the night in Kuta.

Day 7 (Aug 14):
Today we take a short flight to Jogjakarta, Java island (under 2 hours). After settling and lunch, we visit old ladies making Batik, an old man building puppets. The existence of Yogyakarta batik is closely related to the history of the establishment of the Islamic Mataram kingdom by Panembahan Senopati. After moving the royal center from Demak to Mataram, Panembahan Senopati often meditated along the coastal of Java Island, among others in Parangkusuma to Dlepih Parang Gupito, tracing a thousand mountainous cliffs that looked like “pereng” or cliff march. Check-in and spend the night in Yogyakarta.

Day 8 (Aug 15):
We leave early to enjoy the sunrise in Borobudur, then return for breakfast, and rest. This UNESCO world heritage Buddhist temple, dating from the 8th and 9th centuries, is located in central Java. It was built in three tiers: a pyramidal base with five concentric square terraces, the trunk of a cone with three circular platforms, and, at the top, a monumental stupa. The walls and balustrades are decorated with fine low reliefs, covering a total surface area of 2,500 m2. Around the circular platforms are 72 openwork stupas, each containing a statue of the Buddha. The monument was restored with UNESCO’s help in the 1970s. After lunch we will tour around the city for casual street photos. With good weather conditions, this sunset will allow you to take images with statues on the foreground, trees and mist in the mid-ground, and Merapi volcano in the background. Spend the night in Yogyakarta.

Day 9 (Aug 16):
Short drive to Solo and check-in, lunch. On the afternoon, we visit the umbrella makers. Ancient ornamental umbrellas from Central Java have long been famous since 12th Century. We will visit the last two umbrella artisans in this village. You will learn how to compose, arrange a scene to tell a story, and play with light and lines, curves, and angles. Spend the night in Solo.

Day 10 (Aug 17):
A short drive to a larger Batik-making village, witnessing their craft and various photo opportunities. After lunch, we visit a gong factory, where you’ll see how locals build the largest gongs with just basic tools and fire. Afterward, we visit Wayang Kratas (shadow puppet) maker. Brambang, a 91 years old grandfather. Even in his old age, he is still a paper puppet craftsman. Besides leather, paper is the raw material for making wayang He persists in preserving culture with his spirit that is at the end of his life. Spend the night in Solo.

Day 11 (Aug 18):
Early departure for the Bromo national park, and checking into a resort just outside the caldera. After lunch, environmental portraits and portraiture of distinctive faces of Tengerese People. We have access to original, unspoiled Tenger villages, maybe get in their homes, and take portraits in low light. Spend the night near Bromo.

Day 12 (Aug 19):
Leave early morning by 3.00 AM to the crater. Witness the mists shrouding the crater and the surrounding area. We will enjoy Tenger horsemen running, posing, and showcasing their skills. The Tenger people are descendants of loyalists of the Majapahit Empire who resisted Islamization for centuries and were driven further into the mountains after the mass arrival in the area of Moslem Madurese in the 19th century. The Tenger initially numbered 600,000 but over the past decades, many have been assimilated into the dominant immigrant Moslem population. Spend the night near Bromo.

Day 13 (Aug 20):
Another super early departure to photograph 20-25 Tengger Horseman in a conceptual setting with morning mists. After lunch we will be returning home and drive to Surabaya and fly to Bali and check-in and farewell dinner. Spend the night in Ubud.

Day 14 (Aug 21):
Today the trip officially finishes – you can continue to experience the beauty of Bali (through a nice hotel and spa) or return home (airport drop-off).

Price is based on double occupancy. A single supplement of $1075 will apply.* 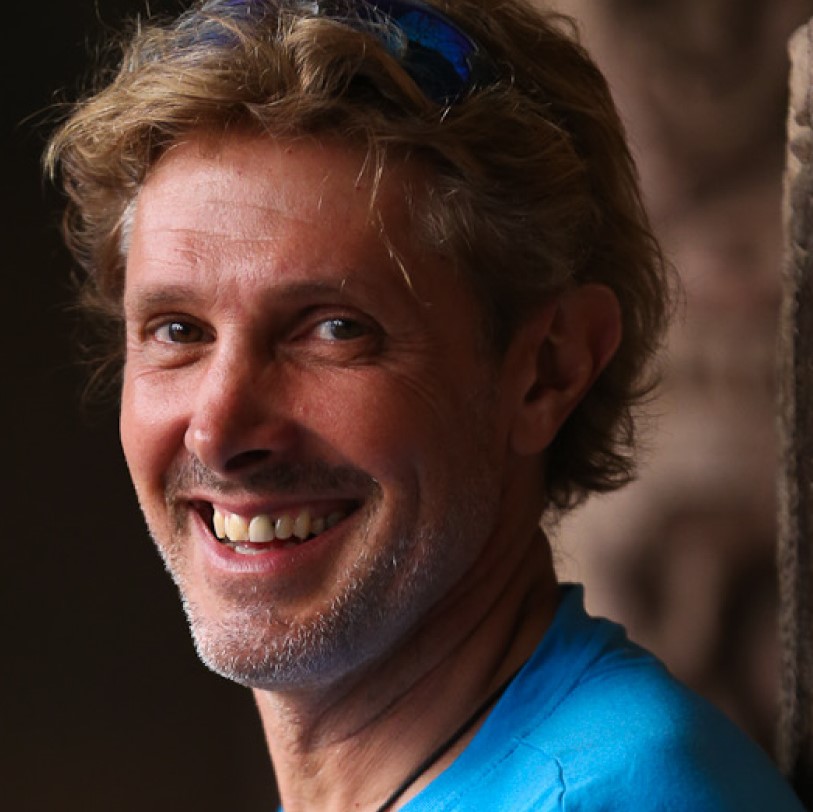 Add me to the interest list for future trips.