Guatemala is a true paradise for photographers. Set in a backdrop of indescribable grandeur – volcanoes looming above with beautiful lakes, lush jungles, and pine forests. And everywhere are the local people – many of whom are descendants of the great Maya civilization that once flourished in the area, still living much the same way as they did before the Europeans first arrived. And the Spaniards did their part too, constructing the colonial gem of a city in Antigua, as well as many picturesque churches throughout the country.

Long before the Europeans showed up in America the Maya had established a complex civilization in Guatemala and the surrounding areas. They built enormous pyramids and temples and made advancements in science, math, astronomy, and the arts. Many reminders of this world still remain – in the ancient ruins at sites like Copan and in the local people and their traditions. We will stay as near as possible to these archeological sites in order to photograph them in the best light in the morning and late afternoon. And we’ll visit the various towns on their special market days, providing many photo opportunities of the modern day Maya and their traditions.

Antigua is one of the oldest and most beautiful cities in the Americas. Situated beneath three volcanoes, its cobblestone streets, crumbling ruins, and colonial architecture make it an ideal photo subject. Indigenous vendors sell their colorful fabrics in the main plaza and the streets. Our hotel is just one block from the central plaza and the cathedral.

Lake Atitlan was described by author Aldous Huxley as the most beautiful lake in the world. When you first see its deep blue water ringed by dramatic volcanoes it’s hard to argue with his assessment. We’ll be able to view the lake from a variety of locations and visit some of the towns located on its shores. Our hotel is conveniently situated very near the shore in the town of Panajachel.

The market in Chichicastenango is world-famous. People come from all the surrounding villages to buy and sell, as they have since pre-hispanic times. It’s truly an explosion of color. We’ll be sure to arrive early in the morning before the majority of tourists arrive. We’ll also visit some lesser-known towns on market days in the area around Quetzaltenango.

Day 1: (Nov 13) Arrive from your flight to Guatemala City. You will be transported from the airport to our hotel in Antigua. We will have an orientation meeting this evening and dinner together as a group. We’ll spend the night in Antigua.

Day 2: (Nov 14) We’ll spend the entire day in and around the beautiful colonial city of Antigua, the former capital of Central America. In the morning a local guide will show us around the main plaza, and some of the finest colonial churches and monasteries in the beautiful colonial town. In the afternoon we’ll we can photograph the city with its cobblestone streets and colonial architecture, while smoking volcanoes rise above. We’ll spend the night in Antigua.

Day 3: (Nov 15) We’ll have some free time in the morning for more photography or relaxing and shopping. In the afternoon We’ll drive from Antigua to Lake Atitlan. On the way to the lake we’ll stop to photograph the many vistas of the magnificent lake and the surrounding volcanoes. Upon arrival we’ll check into our lake-view hotel in the town of Panajachel.

Day 4: (Nov 16) After a delicious breakfast in the lake view restaurant, we’ll travel by boat to the traditional village of San Antonio Palopo and Santa Catarina Palopo, where we’ll visit local homes and photograph families in their colorful traditional dress, or traje, as they weave clothing and carry on their daily lives. We’ll spend the night in Panajachel.

Day 5: (Nov 17) We’ll spend the whole day around Lake Atitlan with our local indigenous guide. We’ll travel by boat to visit the colorful local village of Santiago Atitlan. In Santiago we’ll pay a visit to the local Mayan saint of vices, Maximon. Local people come from far and wide to give him offerings of rum and cigarettes to grant their wishes. At the end of the day, we’ll end up back in Panajachel to photograph the sunset over the lake. We’ll spend the night in Panajachel.

Day 6: (Nov 18) We’ll wake up early to photograph the first light on the lake and the surrounding volcanoes. Late in the morning we’ll drive to the famous market town of Chichicastenango, arriving in time for lunch. In the afternoon we’ll have free time to photograph many of the people getting ready for the next day’s market. We’ll spend the night in Chichicastenango.

Day 7: (Nov 19) We’ll wake up early to experience the famous market at Chichicastenango. We’ll photograph the colorful flower vendors on the steps of the church, the bustling vegetable market, and the many indigenous people who come to barter for goods from the numerous surrounding villages. There a local English-speaking guide will take us to observe Mayan rituals at an ancient Mayan worshipping site on a nearby hill. In the afternoon we’ll drive to Quetzaltenango (also known by the Mayan name of Xela), stopping to photograph the fields of maize with the ever-present volcanoes in the background. We’ll spend the night in Xela.

Day 8: (Nov 20) We’ll drive early in the morning to the fascinating animal market in the village of San Francisco el Alto. This is also the largest textile market in Guatemala. From the roof of the church we’ll be able to photograph the valley below with volcanoes looming in the distance. Later in the day we’ll visit the traditional village of San Andres Xecul, which is home to one of the most colorful churches in Guatemala. We’ll spend the night in Xela.

Day 9: (Nov 21) In the morning we’ll visit Zunil, an agricultural village where the women weave and dress in especially beautiful clothing. We’ll visit our friend Maximon once again as well. We’ll drive on to Antigua, making photo stops along the way. We’ll spend the night in Antigua.

Day 10: (Nov 22) We’ll have a free day in Antigua for photographing this colonial gem, its colorful inhabitants, and some last-minute shopping. We will have an image sharing party that evening after our celebration dinner. We will spend the night in Antigua. 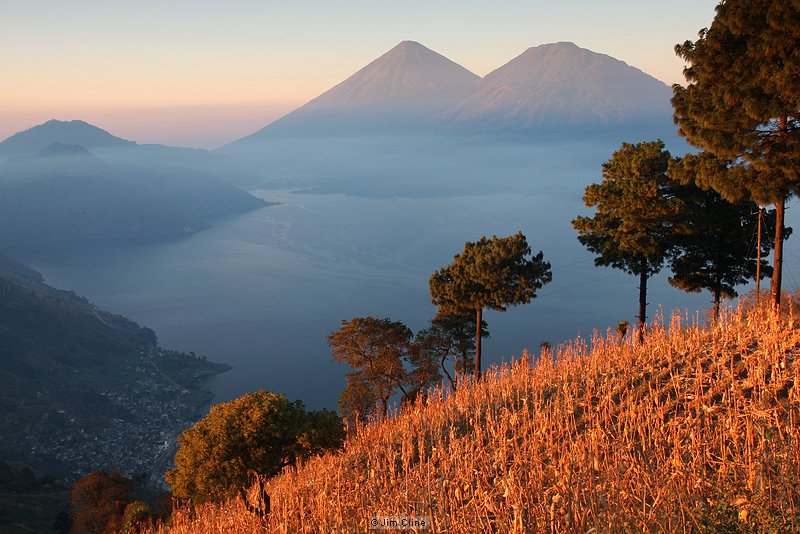 Price is based on double occupancy. A single supplement of $575 will apply.*