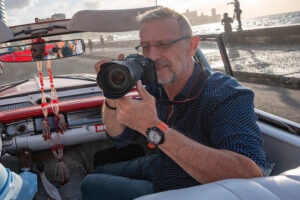 Acclaimed travel writer and photographer Christopher P. Baker—National Geographic resident ‘Expert’ on Cuba and the Lowell Thomas Award 2008 ‘Travel Journalist of the Year’—has spent a career capturing the world with words and camera. His credits span a spectrum of more than 200 publications, from BBC, CNN Travel, and Conde Nast Traveler, to National Geographic, Playboy, Robb Report, and Travel + Leisure. He maintains a schedule in which he travels the world photographing and reporting on destinations as far afield as Antarctica, Japan, Mozambique, Oman, Scotland, and—most notably—Cuba.

Chris has been hailed by National Geographic as “one of the world’s foremost authorities on Cuba travel and culture.” He has led more than 100 tours to Cuba on behalf of Jim Cline Photo tours, National Geographic Expeditions, and other entities. His eight books about Cuba include the National Geographic Traveler Cuba, Eyewitness Cuba, Moon Cuba, and Top 10 Cuba guidebooks, plus the award-winning coffee-table book Cuba Classics: A Celebration of Vintage American Automobiles. Chris is a prolific featured speaker for conferences, seminars, and professional panels; has spoken about Cuba at the prestigious National Press Club, National Geographic Live, and World Affairs Council; and appears regularly on such outlets as CNN, the Canadian Broadcast Corporation, Fox News, and MSNBC.

Chris’ photography has been exhibited by the National Geographic Society, in Washington, DC. His many international awards include multiple prestigious Lowell Thomas Awards, plus the Gold Prize for “Best Photography: Portrait/People” from the North American Travel Journalists Association for his image of a man and horse in Trinidad, Cuba, published as a double-page spread in National Geographic.